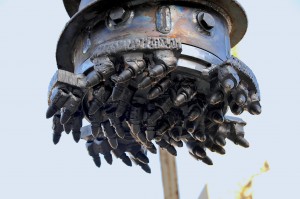 Three generations of the Mills family have been operating Mills Machine Co. in Shawnee, Okla., since 1908. Chuck Mills, the current president, is the first one to aggressively sell their drills bits, augers, and other equipment overseas.

“My dad and grandfather never really exported,” Mr. Mills said. “So when I graduated from college I just had an interest in it. It started out as a hobby. It turned into a pretty good business.”

Exports now account for about 20 percent of the company’s business and that is thanks to the company’s high-quality products and the help of the U.S. Export-Import Bank.

Those sales -and the company’s 20 employees- would be affected if the Ex-Im Bank isn’t reauthorized by the end of September, a prospect Mr. Mills doesn’t want to happen.

Mr. Mills said he first learned of the bank about five years ago. He said he thought it was just for big companies, but learned it isn’t.

“It immediately opened up doors for us,” he said.

Mills Machine was able, through the Ex-Im Bank, to increase the sales of their equipment overseas. Their drill bits and augers are used for a variety of purposes, including environmental monitoring wells, blast-hole mining, drilling for the water, construction, and geo-thermal industries.

He said local banks don’t specialize in international trade, but the Ex-Im Bank does. The Ex-Im Bank provides credit insurance for when his company is selling some of their products abroad.

That insurance is necessary because some of their drill bits and other equipment can cost up to $30,000 each.

He said to him the Ex-Im Bank acts as a “safety net.”

Mr. Mills said he doesn’t like that the government has to be involved in helping export, but said it’s necessary because the private sector isn’t stepping in.

He said it’s “silly” that some lawmakers don’t want to reauthorize the Ex-Im Bank, it should be a “no-brainer.”

“Most people don’t understand international trade who aren’t in business,” he said. “Sometimes the government simply has to step in” to help level the playing field.