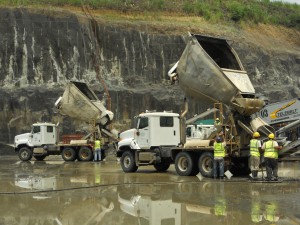 Bill Maxon is the second generation of his family to run Maxon Industries Inc., a Milwaukee-based company that has been able to send its concrete-transportation equipment all over the world because of the Export-Import Bank of the United States.

“I can tell you point blank that I have created jobs with the assistance of Ex-Im Bank,” Mr. Maxon said.

Maxon Industries is like thousands of companies—the majority of them small businesses—that have relied on the Ex-Im Bank to grow and keep jobs in the United States. If Congress doesn’t act soon, the Ex-Im Bank’s charter will expire on September 30.

The Ex-Im Bank has supported 1.2 million jobs in the last five years, something Mr. Maxon can speak to.

His 30-person company, he said, wouldn’t be where it is today without Ex-Im Bank.

The company sells large capital equipment to move and place concrete, such as large cement mixing trucks. Their equipment helped transport millions of cubic yards of concrete for the expansion of the Panama Canal and supported power generation plants in countries such as Turkey.

He said he relies on Ex-Im Bank because as a small business his local bank is “scared as hell of doing business overseas.”

The Ex-Im Bank provides export credit insurance, alleviating concerns that a foreign customer may be unable or unwilling to pay for the goods received and enabling commercial lenders to provide necessary financing. In his company’s five years of working with Ex-Im Bank, it has never had to file a claim.

Mr. Maxon is quick to emphasize that his company, and all the others that use the insurance the Ex-Im Bank offers, pay for the service.

He said the competition from foreign companies is fierce, and companies from China – and elsewhere –often get aggressive help from their government. According to a recent NAM report, U.S. Ex-Im Bank is dwarfed by our major trading partners when it comes to export credit assistance.

He doesn’t like to even entertain what would happen if the Ex-Im Bank weren’t reauthorized, but he knows it will hurt his business.

“Ex-Im Bank helps me almost every day,” he said.