Critics of the U.S. Export-Import Bank would love for you to think Americans will benefit from closing the agency. But start asking around and you’ll find it’s not U.S. workers or U.S. small businesses who are excited by the prospect of an expiring Ex-Im, it’s China.

China has increased its own export credit support 1,000 percent over the last decade and what they’re after is no secret.

Like James Kynge and Gabriel Wildau wrote recently for The Financial Times, Beijing has set its sights on the developing world, “deploying funds from its $3.8tn in foreign currency reserves to boost relations with countries that sometimes have an anti-U.S. agenda” (Kynge and Wildau, “China: With Friends Like These,” Financial Times, 3/17/15).

And they’re succeeding. A recent analysis from the National Association of Manufacturers shows China authorized 10 times more export credit in 2013 than the United States when compared to GDP (National Association of Manufacturers, “The Global Export Credit Dimension,” NAM, 7/29/14). The figures are as alarming as they sound. Ex-Im Chairman Fred Hochberg told The Financial Times last year, “What took us 80 years, in two years they exceeded us” (Barney Jopson, “ExIm Warns US Of Export Risk From China,” Financial Times, 10/20/14). 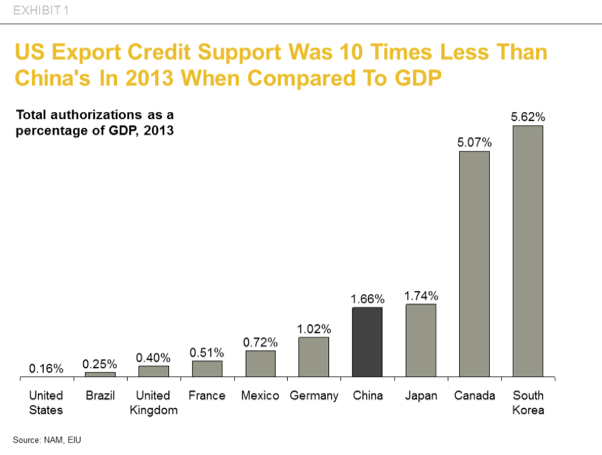 Closing Ex-Im only opens the door to more Chinese influence in developing markets, and it’s abundantly clear they’ll seize the opportunity. Remember that export credit plays a particularly important role in industries like nuclear power, satellites, and aircraft, industries that all form the foundation of America’s national security.

While China and other countries are vigorously increasing export support, the United States is the only one waffling on official export credit. Let’s not give them the satisfaction of stealing American business and reauthorize Ex-Im immediately. We can’t afford to wait.